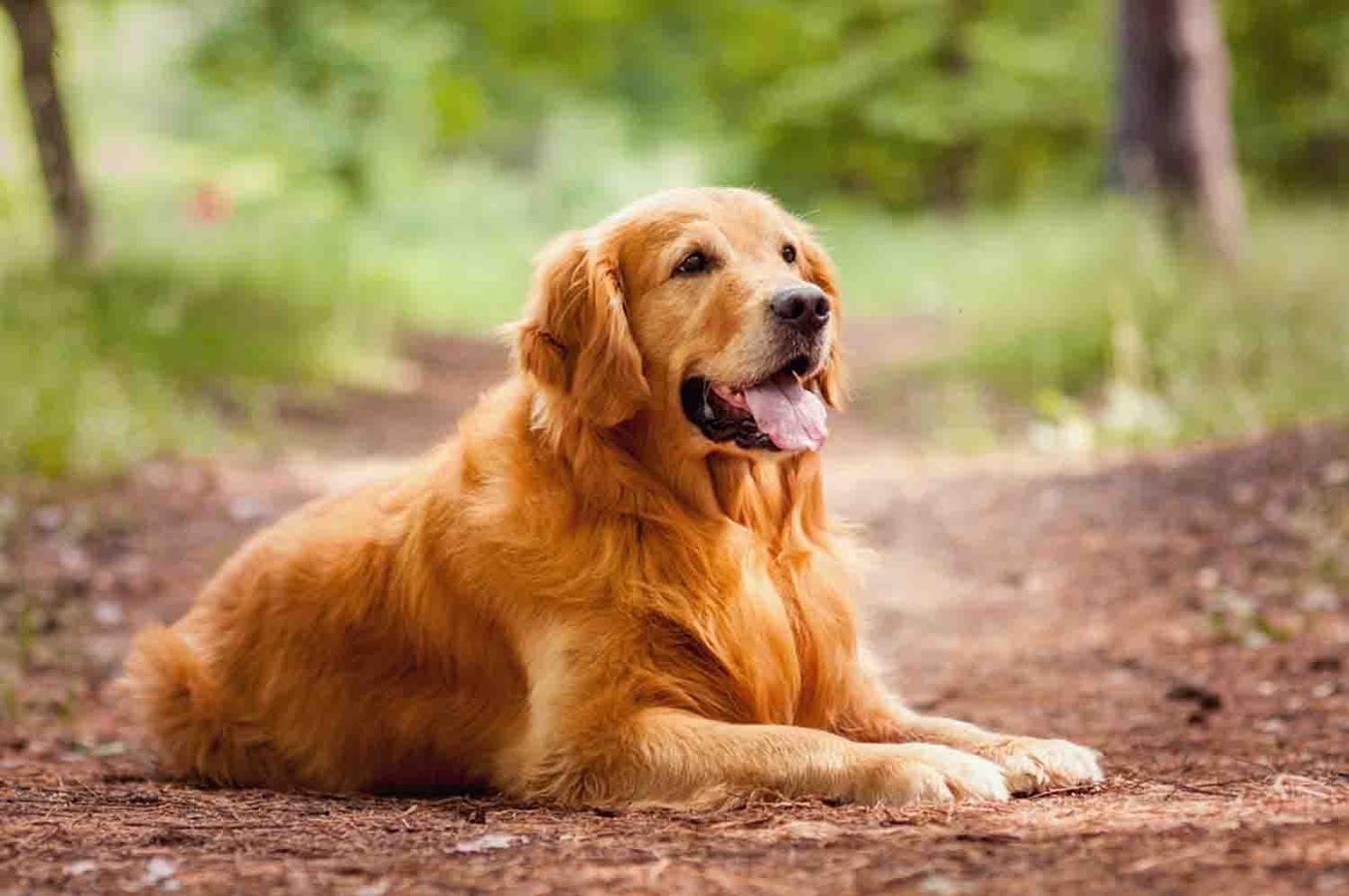 The Golden Retriever Dog Breeds is a sturdy, muscular dog of medium size, famous for the dense, lustrous coat of gold that gives the breed its name. The broad head, with its friendly and intelligent eyes, short ears, and straight muzzle, is a breed hallmark. In motion, Goldens move with a smooth, powerful gait, and the feathery tail is carried, as breed fanciers say, with a “merry action.”

The most complete records of the development of the Golden Retriever Dog Breeds are included in the record books that were kept from 1835 until about 1890 by the gamekeepers at the Guisachan (pronounced Gooeesicun) estate of Lord Tweedmouth at Inverness-Shire, Scotland. These records were released to public notice in Country Life in 1952, when Lord Tweedmouth’s great-nephew, the sixth Earl of Ilchester, historian and sportsman, published material that had been left by his ancestor. They provided factual confirmation to the stories that had been handed down through generations.

Rolling Rotts Kennel is a best dog kennel in Haldwani, Uttarakhand, India. We sale & purchase Kci Register & standard quality Golden Retriever. most complete records of the development of the Golden Retriever Dog Breeds are included in the record books that were kept from 1835 until about 1890 by the gamekeepers at the Guisachan (pronounced Gooeesicun) estate of Lord Tweedmouth at Inverness-Shire, Scotland. These records were released to public notice in Country Life in 1952, when Lord Tweedmouth’s great-nephew, the sixth Earl of Ilchester, historian and sportsman, published material that had been left by his ancestor. The broad head, with its friendly and intelligent eyes, short ears, and straight muzzle, is a breed hallmark. In motion, Goldens move with a smooth,

A symmetrical, powerful, active dog, sound and well put together, not clumsy nor long in the leg, displaying a kindly expression and possessing a personality that is eager, alert and self-confident. Primarily a hunting dog, he should be shown in hard working condition. Overall appearance, balance, gait and purpose to be given more emphasis than any of his component parts. Faults-Any departure from the described ideal shall be considered faulty to the degree to which it interferes with the breed’s purpose or is contrary to breed character.

Males 23 to 24 inches in height at withers; females 21½ to 22½ inches. Dogs up to one inch above or below standard size should be proportionately penalized. Deviation in height of more than one inch from the standard shall disqualify. Length from breastbone to point of buttocks slightly greater than height at withers in ratio of 12:11. Weight for dogs 65 to 75 pounds; bitches 55 to 65 pounds.

Broad in skull, slightly arched laterally and longitudinally without prominence of frontal bones (forehead) or occipital bones. Stop well defined but not abrupt. Foreface deep and wide, nearly as long as skull. Muzzle straight in profile, blending smooth and strongly into skull; when viewed in profile or from above, slightly deeper and wider at stop than at tip. No heaviness in flews. Removal of whiskers is permitted but not preferred. Eyes friendly and intelligent in expression, medium large with dark, close-fitting rims, set well apart and reasonably deep in sockets. Color preferably dark brown; medium brown acceptable. Slant eyes and narrow, triangular eyes detract from correct expression and are to be faulted. No white or haw visible when looking straight ahead. Dogs showing evidence of functional abnormality of eyelids or eyelashes (such as, but not limited to, trichiasis, entropion, ectropion, or distichiasis) are to be excused from the ring. Ears rather short with front edge attached well behind and just above the eye and falling close to cheek. When pulled forward, tip of ear should just cover the eye. Low, hound-like ear set to be faulted. Nose black or brownish black, though fading to a lighter shade in cold weather not serious. Pink nose or one seriously lacking in pigmentation to be faulted. Teeth scissors bite, in which the outer side of the lower incisors touches the inner side of the upper incisors. Undershot or overshot bite is a disqualification. Misalignment of teeth (irregular placement of incisors) or a level bite (incisors meet each other edge to edge) is undesirable, but not to be confused with undershot or overshot. Full dentition. Obvious gaps are serious faults.

Neck medium long, merging gradually into well laid back shoulders, giving sturdy, muscular appearance. No throatiness. Backline strong and level from withers to slightly sloping croup, whether standing or moving. Sloping backline, roach or sway back, flat or steep croup to be faulted. Body well balanced, short coupled, deep through the chest. Chest between forelegs at least as wide as a man’s closed hand including thumb, with well developed forechest. Brisket extends to elbow. Ribs long and well sprung but not barrel shaped, extending well towards hindquarters. Loin short, muscular, wide and deep, with very little tuck-up. Slabsidedness, narrow chest, lack of depth in brisket, excessive tuck-up to be faulted. Tail well set on, thick and muscular at the base, following the natural line of the croup.

Muscular, well coordinated with hindquarters and capable of free movement. Shoulder blades long and well laid back with upper tips fairly close together at withers. Upper arms appear about the same length as the blades, setting the elbows back beneath the upper tip of the blades, close to the ribs without looseness. Legs, viewed from the front, straight with good bone, but not to the point of coarseness. Pasterns short and strong, sloping slightly with no suggestion of weakness. Dewclaws on forelegs may be removed, but are normally left on. Feet medium size, round, compact, and well knuckled, with thick pads. Excess hair may be trimmed to show natural size and contour. Splayed or hare feet to be faulted.

Broad and strongly muscled. Profile of croup slopes slightly; the pelvic bone slopes at a slightly greater angle (approximately 30 degrees from horizontal). In a natural stance, the femur joins the pelvis at approximately a 90-degree angle; stifles well bent; hocks well let down with short, strong rear pasterns. Feet as in front. Legs straight when viewed from rear. Cow-hocks, spread hocks, and sickle hocks to be faulted.

Dense and water-repellent with good undercoat. Outer coat firm and resilient, neither coarse nor silky, lying close to body; may be straight or wavy. Untrimmed natural ruff; moderate feathering on back of forelegs and on underbody; heavier feathering on front of neck, back of thighs and underside of tail. Coat on head, paws, and front of legs is short and even. Excessive length, open coats, and limp, soft coats are very undesirable. Feet may be trimmed and stray hairs neatened, but the natural appearance of coat or outline should not be altered by cutting or clipping.

Rich, lustrous golden of various shades. Feathering may be lighter than rest of coat. With the exception of graying or whitening of face or body due to age, any white marking, other than a few white hairs on the chest, should be penalized according to its extent. Allowable light shadings are not to be confused with white markings. Predominant body color which is either extremely pale or extremely dark is undesirable. Some latitude should be given to the light puppy whose coloring shows promise of deepening with maturity. Any noticeable area of black or other off-color hair is a serious fault.

When trotting, gait is free, smooth, powerful and well coordinated, showing good reach. Viewed from any position, legs turn neither in nor out, nor do feet cross or interfere with each other. As speed increases, feet tend to converge toward center line of balance. It is recommended that dogs be shown on a loose lead to reflect true gait.

Friendly, reliable, and trustworthy. Quarrelsomeness or hostility towards other dogs or people in normal situations, or an unwarranted show of timidity or nervousness, is not in keeping with Golden Retriever character. Such actions should be penalized according to their significance.